HANGING OUT WITH ARCHIVES 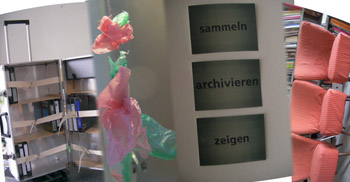 Bildwechsel is an umbrella organisation for women+ and their representation in media, culture and art.
It houses international archives and collections.
collecting/archiving/presenting – this is our slogan! for over 28 years we have worked as an ‘active’ artists archive.
Bildwechsel is a location, as such it creates a framework for artists, activists and researchers, for meetings and collective thinking and acting – locally, nationally and internationally.

The exhibition “hanging out with archives” invites you to dive-in and take a closer look at the archives and archival material we have, and the way we work as an active archive. From the traditional paper-file to the online video museum, the kunstlerinnenarchiv to the feminale collection, the documentations of events, workshops, trips, visits and tours – the visitor can explore the way Bildwechsel works as an active, engaged and developing collection.
look! archives at work!

Entry films and videos are restricted to a maximum length of 7 minutes. The selection commission reserves the right to permit longer films and videos.
All submitted film contributions must be debut works.
The festival accepts: DVD and VHS in optimum resolution. END_OF_DOCUMENT_TOKEN_TO_BE_REPLACED

We are having a small illustrator meeting at Bildwechsel with the summer house stipendiary Susanne Hanus.

Drop by! We want to draw and maybe produce some stickers.

Fuckface and the Cowboys from Space premiere in Glasgow

Burnout Films (in association with Bildwechsel Glasgow) present the premiere of the third Burnout Films production:

Fuckface and the Cowboys from Space

Fuckface and the Cowboys from Space

Burnout Films, 2006
Years in the making, FF&TCFS is an epoch-spanning, laser-blasting technicolour whirl of a sci-fi western. Fuckface of the planet Fagon, a noble but idiotic Disco Robot, attempts to save his people from the oppressive rule of the Space Cowboys. Contains lots of nudity and violence, but no swearing, sorry.

END_OF_DOCUMENT_TOKEN_TO_BE_REPLACED

After Berlin, Hannover and Hamburg this time the performer meeting takes place in Basel.
During this 3-day event the involved report about their different work conditions, present their work to the others and work together.
One aim of the meeting is to network and to make contacts to other cities.
END_OF_DOCUMENT_TOKEN_TO_BE_REPLACED