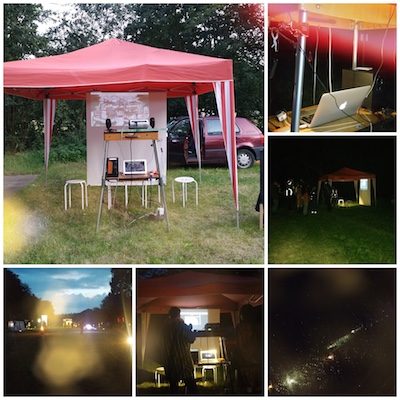 In the beginning of September 2019 das kunststückchen, an openair art event with international artists, happened for the 3rd time in Garlstorf.

For 2019 the title was “Nachtschwimmen” (night swimming) – art projects were invited for a presentation in the dark. bildwechsel was happy to participate with an open air tour of the videoschloss.

since the writing group “who writes his_tory?” was formed at the first edit-a-thon in the kaskadenkondensator/basel in 2016, many more writing workshops have been organized, especially in the german-speaking world – the common goal is to get more contributions from/about women+/artists to wikipedia.
worldwide there are many individual groups, mainly from the cultural environment, inspired by the campaign art+feminism, who meet regularly and write together.
in german speaking countries, these groups are unfortunately still too little connected. with this network meeting we want to change that.
why?
we want as many activists / women+ / artists as possible to edit in wikipedia.
END_OF_DOCUMENT_TOKEN_TO_BE_REPLACED 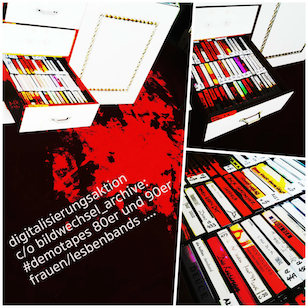 Ongoing digitization projects in the archives and in the video museum.
E.g. digitization of an early collection of demo tapes of women’s bands of the 80s/90s.

Invitation to an evening at bildwechsel

As an official tour guide at Art Basel, Chris Regn has – for years now – trotted through the middle of the art market traffic chaos.
This evening she will present a tour of this year’s art fair and its sensations.

For this year’s collaboration with the Queer Film Festival Hamburg (15th – 20th October) we are looking for videos/films from the past, present and the future that focus on (queer&trans) solidarity, community, spaces and resistance. From video-art to agitation.

We are inviting artists to submit existing work or to create new videos/films.

We will set up a space where the films can be screened throughout the festival, and so would be particularly interested to receive experimental works, video art, and submissions of work that require alternative screening conditions e.g. the use of multiple screens, installations etc. and of work without sound.

Please send your contributions to bildwechsel and include details of the video/film (title, director, date, original format, country, language and a synopsis). END_OF_DOCUMENT_TOKEN_TO_BE_REPLACED